This time of year makes me long to travel; it’s just so beautiful in the fall. Last year, I went on a road trip through the Southwest and flew to Vermont for a wedding. I wrote this shortly after my trip through Arizona and New Mexico.

I recently went on a road trip in the American Southwest with my friend Danielle. We had the pleasure of visiting the Grand Canyon. If you’ve never been to the Grand Canyon, it truly is breathtaking. We were only there for a short time, so we didn’t even begin to scratch the surface of all the things there is to see and experience there. The Grand Canyon is called a World Heritage Site by the UN, and rightly so.

Another World Heritage site that Danielle and I visited on that trip was the Carlsbad Caverns. Carlsbad Caverns were just as breathtaking as the Grand Canyon, but my experience there was very different. For one, the site was far less crowded. There were people everywhere at the Grand Canyon. Common sights were bloated parking lots, tourists from all over the world snapping hundreds of pictures (including us!), and crowded shuttles transporting untold numbers of people around the park. Once inside Carlsbad Caverns, I had moments where the tomb-like silence wrapped around me. I could look around me and not see another person. It was so different and I couldn’t put my finger on why such a beautiful place would be so overlooked.

As we walked along on the self-guided tour, they had listening devices that would tell you tidbits about the caves. We’d stop at various locations and listen to a recorded message telling us about that room or feature.

I learned that Carlsbad Caverns were not formed by flowing water, as most caves are. They were formed by a reef, made up of millions of tiny creatures dying. Once the reef became too large, it was cut off from its water supply and became giant underground caverns. You can still see formations that look like a reef, reminiscent of the distant past.

As if the reef features were not cool enough, water seeped in and created glorious stalactites, stalagmites, columns, and draperies all over the caves. What beautiful was made breathtaking. 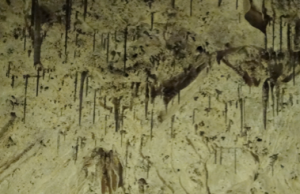 One message in particular directed my attention to a section of tiny stalactites hanging from a ceiling, like those in the picture to the right. The tape said, “Look at the tiny delicate details. We talk a lot about what’s tallest, biggest, fastest, greatest, and best, but we forget to notice the beauty that’s everywhere, even in the smallest places.”

These tiny stalactites are evidence of what has happened in the cave long ago. They’ve left a mark on the inner landscape, yet one has to focus her eyes to see them. They seem far less significant than the “Bottomless Pit” or the giant cave decorations that stretch from floor to ceiling in other parts of the cave.

Danielle and I also took a ranger-guided tour, where they took us deep into the cave and turned all the lights out. Talk about a strange moment! It is so dark inside the cave that you can feel your eyes dilating to saucer size and yet you cannot see even a whisper of light. Check out the picture to the left (just kidding, not a picture). To add to that, we had a moment where everyone was quiet in the deep darkness. Again, not a sensation that I’m used to experiencing. It was completely silent. No planes, no cars, no animals. Nothing.

But it was in that deep silence that I could hear a tiny “drip” “drip” “drip.” The sound inside of the cave today is the dripping water that has formed so many magnificent structures in the cave over eons. I heard a tiny voice deep within me, “God did not simply create. He is creating.”

I had to catch my breath for a moment.

I had the sensation as if I were traveling deep inside of myself. I could see the beautiful structures that were caused by the slow, steady processes occurring outside. I could hear (and periodically, unfortunately for squeamish me, feel) the drops of water as those processes continued.

I wonder what it would look like to climb into the interior parts of my soul. Would I, too, have beautiful formations left from the changes occurring all around me? How has God changed my inner landscape to reflect my experiences, both wonderful and heartbreaking? What is under my surface?

And suddenly I was very sad. So many people were willing to journey to the Grand Canyon, a place so *obvious* one can’t help but see its beauty, but so few were willing to take the long journey inside the Earth to see the beauty that lies beneath. It is too risky. Too dark. Too quiet. Too unlike what we experience on a daily basis.

It is truly a discipline to travel inside and notice the tiny places where he is working. It’s frightening to wait in the silent darkness for signs of life. But it is only in the darkness that I can see the tiniest flicker of light. Only when my eyes are fully open and I am truly quiet will I see God and hear where he is working within me.

I find great comfort in knowing that the God who created such magnificent places is not done with them. They will grow more magnificent and detailed over time.

Surely, my Creator isn’t done with me either.

← Into the Fire
Three-Legged Race →